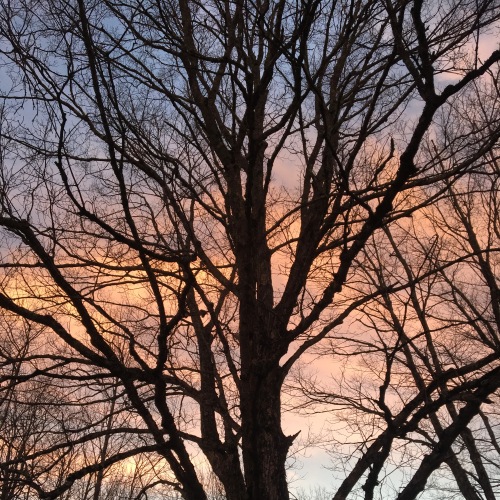 Honestly, I was scared when I got here last night.  So dark! A porcupine greeted us as we arrived, trundling along, his plump body and prickly quills undulating as he walked. He glanced back at us, and I quickly shut the car door in case it threw its quills at us.  Everyone else jumped out.

I lingered in the car, dreading the cold and the dark and the hectic shuffle of bags and belongings being transferred from trunk to porch and to farmhouse. Steeling myself, we got out, Buster in his sheepskin coat and me in my purple one. We headed toward the house, looking out for the porcupine and feeling safer now with the house lights on.

Julian reported that the porcupine was slowly climbing the tree in the front yard.  I wanted to see but was too scared by the all-consuming blackness to do more than take a quick glance. No sign of her.

I headed inside where I was pleasantly surprised to find it warm and cozy; the furnace had apparently been on for a couple hours. Jon and Dad began working on the fire in the wood-burning stove in the living room while Liz and I began unpacking the Thanksgiving leftovers.

I gave Julian a $20 bill to keep taking Buster out so he wouldn’t tinkle on the floor out of nervousness. “I’m scared of the dark,” I whispered, confessing my weakness. He accepted that without comment, just glad for the cash as any 17-year-old would be.

With Julian in bed before I was, I forced myself go outside one more time with Buster, turning on all three front door lights. I stood on the porch while he stretched out the leash down the front steps to the frosty grass below. I could see the stars through the trees and wished the lights were off so I could see better, curiosity fanning my courage.

Darkness stayed very close throughout the night as Buster and I camped out on the couch, close to the warm fire and its faint glow. Neither of us moved much, though I had to unzip the sleeping bag a couple times as hot flashes caused sweat to pool on my chest.

I waited until morning light had crept in enough to see the furniture outlines before slipping on Dad’s coat and stuffing my hands deep in the pockets. Not too cold outside, and I felt alive. Dark branches contrasted against light blue sky with streaks of pink and orange. I took photos while Buster meandered about, and we both kept an eye out for the porcupine. I half hoped, half dreaded to see her, but she was gone.

The chickadees across the road began their morning scold and I looked around at the many tree shapes emerging against the lightening sky. The grass felt crunchy under my feet, the frost stiffening their spines against my foot steps, the sound like breaking glass.

No one was stirring inside the house yet. I added a log to the stove and opened the vent; flames snapped and crackled as I settled onto the couch again with a cup of coffee and my journal. Fortified by the country morning, I felt brave again, knowing the darkness is really only in my mind, and that fire, and a blank page, can banish it.

Here.
In the country garden.