I found the perfect job for my 17-year-old son the other day.  It’s at the Wild Birds Unlimited store.  They need someone to unload the seed bags from the truck, move heavy boxes, and attend to the sales floor if needed.
Someone who likes nature.
Who likes birds.
Who likes people.
It’s perfect for him!

Which is why, when I suggested it, he immediately said, “No.”

“Sure, Mom.  I can just hear me telling my friends, ‘I can’t hang out with you because I have to go to work at the Wild Birds store,'” he said, a slight smile curving his lips.  Like, “Aww, Mom.  Aren’t you cute!” and then, “Fuggetaboutit!”

Sigh.  OK. That plan did not work out.  Big surprise. However, I won’t lose hope.  His dad has big plans to get him a job this summer, so I’ll wait to see how that works out.

In the meantime, my 19-year-old daughter is home from college, and, after a stimulating conversation last week about why I will not provide unlimited funds for new clothes, even if she goes to Forever 21, she called up a few restaurants to set up interviews. The next day, she got a job.  Then she applied for an internship at the Women’s Center, and on Monday, she was working there.

So there you go.  And I had absolutely nothing to do with it.  Well, maybe a little to do with it.  But, I’m thrilled. It seems that my children DO have their own ideas and opinions, so, I need to let them try them out.

This morning, I’m sitting here in my garden, watching the juvenile bluebirds hanging around the mealworm dish.  They open their mouths, hoping the parents will feed them.  But it seems that won’t work anymore. The parents ignore them and then fly off back to the nest box to feed the newest clutch. It’s time for these fledglings to fend for themselves.

So, here we are, sharing that experience, me and the bluebirds, as we watch out children grow.  We are doing what we have to do, even if it hurts a little to let them go.

Spring shadows and first lilies.
The nuthatches have nested in the bluebird box and
the cool weather will soon be gone.
Just not quite yet.

The Bluebirds Came to Visit Me Today

The bluebirds came to visit me today.  I stepped outside this morning, onto the front porch, and heard their burbling call before I saw them. The male was perched on a feeder, the female was flying around the nest box. They stopped briefly to take a look at me.

Their coats are dusty blue, shaded by winter, but still lovely to see.  The male, perhaps conscious of my appreciation, shyly showed his back to me, then, with a quick hop, displayed his dusty red breast on the other side.

The brilliant red of a jaunty cardinal on another feeder provided a sharp contrast. He was lovely against the dull winter browns outside, even here in green Florida. Then the crisp black cap of the chickadee was revealed as she landed on the feeder, chased off again by a scolding tufted titmouse dressed in sharp grays and warm browns.  I fell in love with the tawny stripe under his wing, so vulnerable against the creamy white of his belly.

As I returned to my chair in the living room, I saw that no birds were paying attention to the feeder in the backyard. That’s OK.  I was cheered by the bright tangerine orange of my new cushions on the garden furniture, a treat to myself for Christmas.

So. A new year begins. I am filled with fresh ideas, dreams and plans, as exciting as tangerine orange, but still in development, like the blue on the back of the winter bluebird.

I can wait.
And hope.
And dream.

Anticipating the gifts of the year, like the sudden flash of colorful birds, landing on a feeder.

p.s. Photo is my slightly edited version of  the latest cover of Bluebird Magazine, which I subscribe to as a member of the North American Bluebird Society. 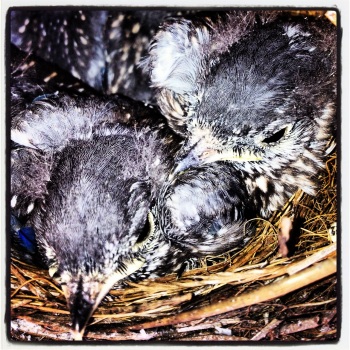 I will remember these years, of getting the children off to school.  These high school years, when I did it on my own.  Anchored by my chair, and my journal, I have been present for them, preparing breakfast, helping to find socks, watching the time; all the while, they grew up.

I’ve been waiting to see if Matt would get up, without me reminding him again. Waiting to see if Camille made it out on time, so I wouldn’t have to threaten to drive her to school myself the next day. Waiting to see if the birds would come to rest at the bird feeder in line of sight from my chair; I pause to check them out as I write.

This morning, three cardinals came to rest on the iron table under the feeder — a bright red male, a juvenile in dull browns, and a female. How long will they stay?  I wait to see.

Sitting in this circle of light, I am glad to have been Here, Now, available to my children, and my own self, as we each face the day.

Soon, I will not have any children left to rouse, and the mornings will be different.  But today, I’ll be grateful, for the flash of red, for the circle of light, for the honey toast crusts left on the Matthew’s plate.  All the joys, the simple joys, of being Here, Now, in this moment, in winter’s light.

“There are hundreds of ways to kneel and kiss the ground, ” says Rumi.

Thank you, Divine Mother, for my beautiful chapel, for my red bench pew, for my pine tree altar, as I am attended by the soul birds around me.  (Is it an accident that angels are depicted with wings?)

Sitting on my red pew, drinking my rich brown, morning coffee in the flowered chalice offered by my daughter, I am at one with the Divine, the Good Earth, the way of peace.

The tiny kinglet darts back and forth above my head, playing in the dusty green leaves of Florida’s fall.  The red-capped chipping sparrow eats peacefully at the feeders, unperturbed by my presence.  And far off, the winter-brown bluebird sings, his voice, at least, not camouflaged by the long nights and short days before winter solstice.

Back inside, I light the candle on the piano altar, and two other candles around the room, warming this “inside chapel” of my living room with spirit light.  Gently, my fingers touch the two feathers next to the Tibetan bell, a tiny bluebird feather, a richly colored cardinal feather.

And I smile with the joy of waking up, waking up to the pleasures of the spiritual life, of the clarion call, of the golden circle, of the blank pages of the day.

To love morning.
This is to be alive.

In the photograph, the mama bluebird nestles into the nest box.

Beauty, is my first thought.
How lovely she is!
Large, black eyes.
Beautifully aligned beak.
Her perfectly symmetrical head,
covered with the light and the dark.
Blue feathers.
Purple nest.
Brown wing tips.
Small, round opening from behind allows the light.

I remember watching her build this nest on the “bird cam” we set up.  At first, she collected bits of the long, pine straw needles and laid them in the bottom of the box.  Eventually, she would hop into the box, lay dawn a straw, then twist and turn her little body, her tiny claws scratching an opening that was softened by the curve of her breast.

Over and over, she entered, nestled, and flew out again. It seemed a bit of an invasion of her privacy, but I hoped for her forgiveness.  I was learning so much, about how to build a nest, how to make a circle.

The nest box squared the circle.  Inside the edges, a universe opened up. And in this cosmos, the bottom of the nest, the chalice, the darkness, the center, the circle…she laid an egg.  And then another. And another. And another. Each sky blue oval was another universe, the infinity of the possibility of creation, the yoke inside — the golden circle — a place of infinite growth.

It was a lovely process to watch.

The first time I saw her enter the nest box, I hollered for the kids. ‟She’s in there, she’s in there!” I called.  They came running.  And when  first egg appeared, they were both thrilled.  (At least, that’s the way this mama bluebird chooses to remember it.)

To find my center,
I scratch with my feet a little,
and hunker down,
and rub my chest into the rough spots,
smoothing them with my love,
my patience,
my faith in the miracle of the circle.
A miracle of holiness.
A miracle of wholeness.

— from a journaling prompt, to describe a photograph, at the Women’s Circles, Women’s Stories writing retreat at the Center for Journal Therapy, Denver, CO, July 18, 2013