Where I’m From: Writing On the Theme of Home 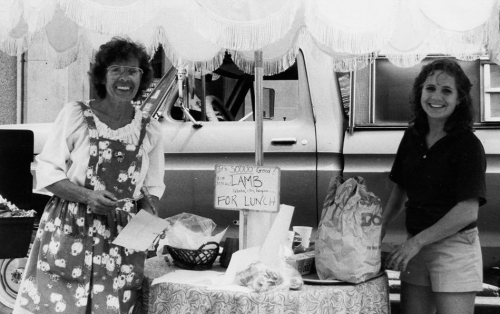 Selling lamb kabobs at the Farmer’s Market with my mother in Western Pennsylvania circa 1983.

“The place I lived as a child, the sharecropper’s farmhouse with its wind-bent mulberry trees and rusted farm machinery has completely vanished. Now there’s nothing but plowed fields for miles in any direction. When I asked around in town no one remembered the family. No way to verify my story. In fact, there’s no evidence that any of what I remember actually happened, or that the people I knew ever existed.
— Louis Jenkin

This summer, at the Community Transition Center where I write weekly with incarcerated women, we are focusing on the theme of “Home,” as in, “coming home to ourselves.”  This Friday we wrote poems based on the structure of a beautiful poem titled, “Where I’m From,” by George Ella Lyon, which begins:

“I am from clothespins,
from Clorox and carbon-tetrachloride.
I am from the dirt under the back porch.
(Black, glistening
it tasted like beets.)
I am from the forsythia bush,
the Dutch elm
whose long gone limbs I remember
as if they were my own.”
—excerpt, Where I’m From, by Geroge Ella Lyon

This poem, by the way, has started a movement that you can read more about here. We carried on that movement by writing our own poems as we sat in the circle on Friday morning in a very cold classroom on Catherine Street with eight women. Below is my version of it. (If you want to read their versions, stay tuned for our mini-anthology to be published soon as a fund-raiser to keep supporting our work at the CTC!)

Dear America: Won’t You Be My Neighbor? 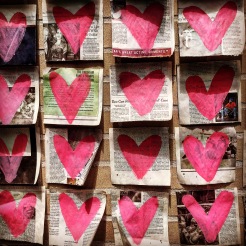 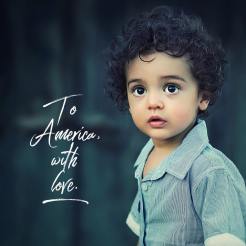 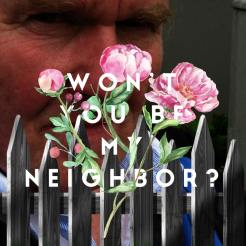 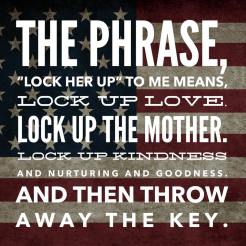 “Love is at the root of everything — all learning, all parenting, all relationships.
Love or the lack of it. And what we see and hear on the screen
is part of who we become.”
—Fred Rogers

I wish we could be kinder to one another.

Growing up as I did, under the influence of my Pittsburgh “neighbor” Fred Rogers (and lots of storybooks), I did always believe we were “the good guys.”

In my mind’s eye, I saw the American soldiers coming to free the Jews in the Nazi concentration camps. Square-jawed, fresh-faced, tall and healthy, they were shocked by what they saw there, and earnestly went to work to help them, to free them, to feed them. I saw them holding emaciated bodies in their arms, giving them soup, and kindness, and love.

Franklin Delano Roosevelt was my World War II hero, and Eleanor Roosevelt (my namesake) was my model of the enlightened national cultural leader. He created the New Deal for Americans, one that protected them from the dire poverty of the Depression with Social Security (think about that phrase) and Medicare. He wanted to ensure that no one would starve here in our own country due to extreme poverty or age or poor health.  Not on his watch.

Then Eleanor served as the first Ambassador to the new United Nations and was named the chairman of its Commission on Human Rights, relentlessly pursuing the adoption of the Universal Declaration of Human Rights by all countries until it was done. She helped forge an agreement around the world, an agreement joining all nations to work together toward peace and justice for all so that the destruction and savagery of World War II might never happen again.

The phrase, “Lock her up” to me means, lock up love. Lock up the mother.  Lock up kindness and nurturing and goodness. And then throw away the key.

Today, however, I find it painful to acknowledge that some of my own friends, neighbors, old classmates, and even relatives have elected a president and therefore an administration that, to me, is the anti-FDR, the anti-Eleanor, the anti-Mr. Rogers. These leaders are not kind, nor loving, nor compassionate in any way.

Instead, under the guise of “we need strong leadership,” and while watching the hyperbolic prat of TV screen pundits, they are able to justify, or ignore, or perhaps even secretly support:

But of course, the truth is even uglier than that. Turns out that we never really were the good guys. We built this country by enslaving and exploiting our First Nation peoples, African-Americans, immigrants, and, for certain, women and children. We’ve been separating children from their mothers throughout our history. Today we do this mostly through our privatized prisons, which have been shown to do more harm than good for mothers and their children. ICE, in my opinion, is just another form of this idea that “locking people up” is some kind of real solution. The phrase, “Lock her up” to me means, lock up love. Lock up the mother.  Lock up kindness and nurturing and goodness. And then throw away the key.

I watched the story of Fred Rogers last night in the movie “Won’t You Be My Neighbor?” My God.  He is the antidote we need in this world! He represents the enlightened male, the nurturing, kind man, the spiritual leader we need. He is the feminine side of man, and, yes, he was berated and even hated for that. After a lifetime of ministry to children and America, he had done so much good in the world.  But by the end, after 9-11 and the vitriolic hyper-patriotism that followed, he wondered, did he make any difference at all?

Today, on this Fourth of July holiday, as I reflect on this anti-woman, anti-mother, anti-father, anti-nature, anti-immigrant, anti-kindness, anti-love state of our country,  I must ask, America, seriously, Will you admit this is unjust?  Will you admit that we can’t go on like this? Will you at LEAST support greater compassion for the people asking for asylum at our border?

Will you be the great nation I thought you were?

Seriously, why can’t be good neighbors? Why not work to create a place of safety for all of us? A “neighborhood” based on love and all the possibilities of what we can create together, not fear of losing what we have? After all, despite our dark past, I do believe this is what actually made America great.

The question we face now is, who DO we want to become?

If nothing else this Fourth of July, I hope that you will—that we all will—make a commitment to greater compassion and love when we go to the voting booth this fall. Especially if you are a mother or a father, I ask that you remember this: Our children, our little children, are depending on you.  I hope you will show them the way of love and kindness for all, as Mr. Rogers did.

Here.
In the American garden.

Captured Moment on the Journey 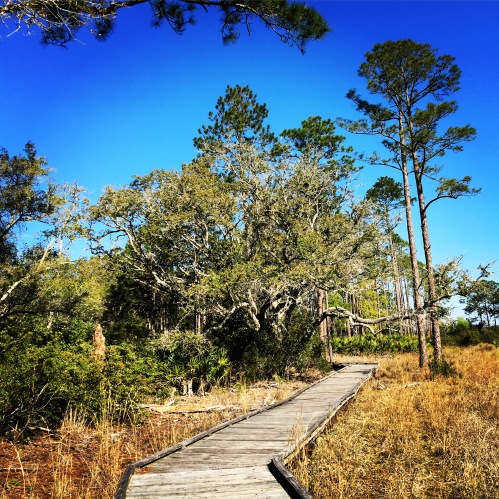 We were on the boardwalk, looking over the savannah.  We’d just spotted two birds in the tall Florida grasses, just beyond a tree trunk and a clump of bushes. We all paused, trying to identify these two brown, long-tailed birds.

I could not make them out. What were they? Curious, I followed them when they flew away, startled by our movement. The others continued down the boardwalk, but I went in the opposite direction, hoping to get a closer look.

I did!  There they were, one clinging to the grass, the other perched in a bush. I tried to find it in my binoculars, confused at first by the clumps of leaves on the bush, until it’s round breast came clearly into view, proudly flashing in the sun.

White throat.  Slightly flat brown head.  White beak…not real long.  It occurs to me, this might be a migratory bird, since I didn’t know it right away.  Maybe it was a shrike?  But no; too brown.  Maybe an oriole?  No, wrong color scheme.

I puzzled for awhile, and finally, worried the others might get too far ahead, I moved on.  The boardwalk stretched out ahead of me, empty, bare, warmed by the sun.  I quickened my step, wondering how far they had gotten, then calmed myself, hearing their voices.

I slowed down again (at least in my own mind), wanting to hold on to that moment: The open savannah, the warm sun, the light getting a bit stronger as it rose higher in the sky.  I was aware of that in-between state of the present, with the pair of birds  behind me and the small flock in front of me, clutching cameras, binoculars, jackets.  They were in the future, this moment was the present, the unknown birds already in the past.

Such are the combined pleasures—and insights—of hiking on a trail, looking for birds, and slowing my stride to capture a moment of time.

Here.
In the bird-watching garden.

(P.P.S. see more pictures and watch a video on our WWf(a)c Facebook page.) 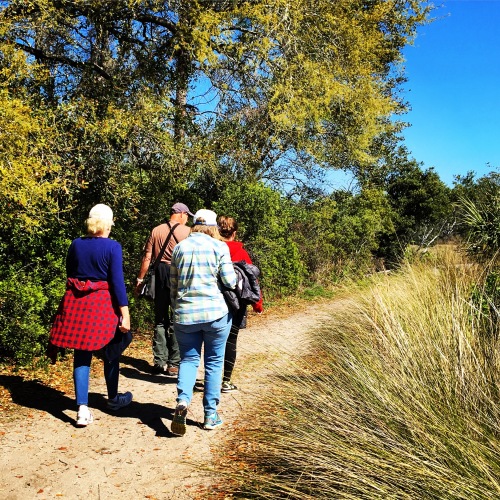 Down by the Riverside 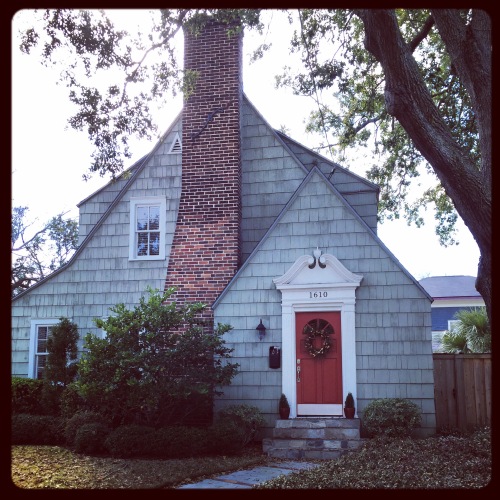 Written on August 9, 2015, from my new home in Riverside, which is also the new home of Women Writing for (a) Change, Jacksonville.

When a robin came to visit me last January, warning me that change was coming, I could not have imagined how much, indeed, was coming my way.

Six months later, I’ve moved to a new house in Riverside, my last child has left for college out of state, and the garden I tended for 12 years has been turned over to someone else’s care.

I’ve also acquired a new life metaphor: The river. My new house is just steps from the riverbank, so every day Buster (my Yorkie) and I walk to the river, where I am reminded to flow WITH the river, not push against it. Getting to this place, mentally, emotionally, physically, and spiritually, has been quite a journey. I’ve chosen to work with the Universe, reading the signs, and taking right action from there.

So far, it’s been pure pleasure, but yesterday I woke up for the first time alone, with both my son and daughter gone to college, and I felt a deep ache inside me. Yes, the hardest job of a mother is to rear her children so they can one day go away from her.

It has been my privilege to do that.

But now, we’ve all transitioned to a new life stage, and we’ve got to do the next right thing. Fortunately, I’m reading Transitions, by William Bridges, and it’s helped a lot.

Meanwhile, I’m enjoying my new neighborhood, running often along the river, walking to the Riverside Arts Market and Grassroots for my groceries, and dropping in to Five Points’ Sun Ray Cinema for their latest film. It feels good to leave behind my life on the road in the ‘burbs, where it seems I was accessible to everything and close to nothing.

With Fall coming, it’s time to call a new circle of women for the latest fall writing classes. We’ll be using Julia Cameron’s famous book, The Artist’s Way, to guide our writing, as I’d like to explore our artistic process as writers and “cultural creatives” here in Jacksonville (as Alex Coley of Unity Plaza would say).

At Women Writing for (a) Change, Jacksonville, I hope to provide a warm hearth, comfortable chairs, and a safe circle for women to explore their own creative flow, their own life transitions, and their own unique stories of growth, personal transformation, and right living.

I hope you’ll join me, so we can find The Way together.

Here.
In the Riverside Garden. 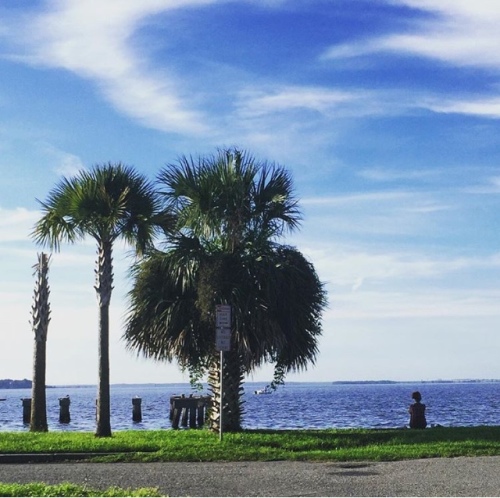